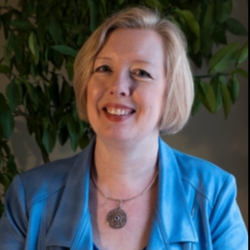 Laura Adlers has worked for the past thirty years in the private, not-for-profit and public sectors in Canada, the United States and internationally, with specialization working in the cultural sector. Recognized for her leadership skills, she has worked primarily with performing artists and arts organizations in Canada and abroad and is known for her work with Canadian and international choirs. Laura has been the Executive Director of The Elora Singers and Festival since March 2020. Under the artistic direction of Dr. Mark Vuorinen, The Elora Singers is one of Canada’s premiere professional chamber choirs and is the ensemble in residence at the annual Elora Festival, Canada’s international choral festival, celebrating its 42nd season in 2021. From 2011 – 2014, Laura was the National Program and Community Relations Director for Business for the Arts’ flagship artsVest™ corporate sponsorship training program. As a member of the executive team, she was responsible for the national expansion of the artsVest program. This position required her to travel across Canada, meeting with community partners and arts managers and learning about the specific dynamics of Canada’s provincial arts and heritage communities. This invaluable experience sparked a great interest in pursuing graduate studies to enhance her knowledge about arts management practices around the world. In 2015, Laura completed her Master of Management in International Arts Management (MMIAM) through studies at HEC Montréal, Southern Methodist University in Dallas, Universidad de los Andes in Bogotá, and Bocconi University in Milan. She conducted thesis research in Riga, Latvia and presented her thesis in Milan. From 2017-2019, she was the Editor of the MMIAM blog, which features interviews with MMIAM alumni, members of the program’s International Advisory Committee and articles from the International Journal of Arts Management. Since 2015, Laura has worked as an independent management consultant and has a special interest in international program development. She continues to produce cultural projects under the umbrella of The Adlers Agency. In December 2020, Laura was appointed an Officer of the Cross of Recognition by His Excellency Kārlis Eihenbaums, Ambassador for the Republic of Latvia in Canada. Laura was recognized for her many years of promoting Latvian culture and artists to an international audience, especially in Canada. Of note are her many years of promoting guest artists of the Toronto Latvian Concert Association and producing and promoting concerts for the last three Latvian Song Festivals in Canada. She was instrumental in organizing international tours for the Latvian Youth Choir BALSIS and producing choral workshops for conductor Ints Teterovskis from 2009-2014. In February 2018, Laura co-produced the Nordic Light Tour for Latvian composer Ēriks Ešenvalds, in collaboration with Artistic Director Robert Cooper, Managing Director Lisa Griffiths, and the Orpheus Choir of Toronto. The tour included concerts and workshop and special events in Toronto, Kitchener-Waterloo, Ottawa, and Montreal. This project won Choral Canada’s Innovation Award at the national Podium conference in St. John’s, Newfoundland in 2018. In July 2019, Laura produced the State Choir LATVIJA’s début Canadian tour, which included concerts and workshops at the Latvian Song Festival in Toronto, Ottawa and Elora. In addition to her work as an arts manager and producer, she is also a published translator and regular contributor to the award-winning Latvian Literature platform, which was established to promote Latvian literature and its distribution abroad.