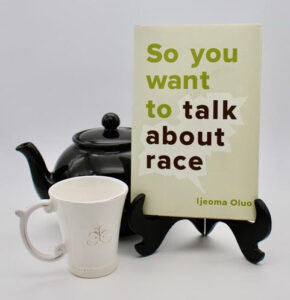 Our next book will be Ijeoma Oluo’s So You Want to Talk About Race.

Ijeoma Oluo is a Seattle-based writer, speaker, and Internet Yeller. Named one of The Root’s 100 Most Influential African Americans in 2017, one of the Most Influential People in Seattle by Seattle Magazine, one of the 50 Most Influential Women in Seattle by Seattle Met, and winner of the of the 2018 Feminist Humanist Award by the American Humanist Society, Oluo’s work focuses primarily on issues of race and identity, feminism, social and mental health, social justice, the arts, and personal essay. Her writing has been featured in The Washington Post, NBC News, Elle Magazine, TIME, The Stranger, and the Guardian.

Our guest facilitator will be charles c. smith, the Executive Director of Cultural Pluralism in the Arts Movement Ontario and Artistic Director of the wind in the leaves collective.  Charles is a poet, playwright and essayist who has written and edited fourteen books. He studied poetry and drama with William Packard at New York University and Herbert Berghof Studios, drama at the Frank Silvera’s Writers’ Workshop in Harlem.  He won second prize for his play Last Days for the Desperate from Black Theatre Canada, edited three collections of poetry and his poetry has appeared in numerous journals and magazines.